Happy New Year's Eve! I wanted to share some more pictures from yesterday's visit to the Huntington Gardens. Here they are, in no particular order. I'm trying to practice taking pictures (and posting!) for my own January challenge.

The Aloes are really starting to bloom:
A lot of the agave were putting on bloom spikes too, but none were blooming yet.

Here are some random snapshots of some of the agave and aloes I saw. I always end up with a ton of pictures, and never remember what anything is. ﻿
This next picture is one of my 'favorite' plants - if I were forced to pick one. It's actually behind the cactus house (structure on right), and when the sun hits it right, it just glows.
The weather on Sunday was "wintry" for southern California - overcast and mid-fifties. It even rained and hailed at one point! Which meant a lot of people were hiding inside the museums, and not in the gardens.
There were some animal visitors too, like this one at the waterlillies' pond.
The Huntington just got done renovating the Japanese garden, and adding the new Chinese garden. Thankfully, all the construction has left the bamboo groves untouched. The ones at the end of the Japanese garden are especially huge:
The big grove is some kind of green bamboo, but they have some smaller groves of yellow, variegated and black bamboo also. Not much grows under the bamboo, but there was this blooming Camilla in the big grove:
Here is a picture of one of the culms, with my hand for scale. These things are huge!
It's like being in a forest - but made of grass. I wonder how much maintenance they have to do to keep the bamboo from growing through things (like the pathways!)
I hope everyone has a happy and healthy New Year! May 2013 bring you the best garden ever!
Posted by Renee at 5:29 PM 7 comments:

Last night, I fell down a rabbit hole in blogland... one of those cases where I was looking at a blog, clicked on a link in their blog roll, read through a new blog, which reminded me of something, which reminded me of the Huntington Gardens, which meant I had to look at their website, where I found an exhibit I hadn't known about. Now, I really don't have the sophistication to understand viewing stones (although I saw the exhibit and it was nice) so the real exciting exhibit to me was "Steel and Stone".

So of course I went to the Huntington the next day to see it. I love being on vacation!

And the exhibit was awesome. It was different sculptures by an artist named Khachik Khachatatouryan, who I'd never heard of before. Here is the poster for the exhibit: 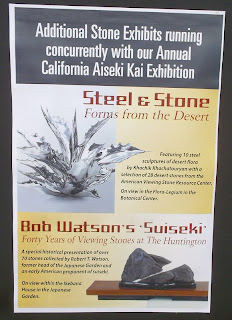 There were about 10 different sculptures, but I won't show pictures of all of them, in case anyone gets a chance to go down and see them. The information said that the sculptor had seen all these plants at the Huntington, so I went and took pictures of them also, to show the steel versions side-by-side with the real ones:

﻿
I actually have one of these at home! So it was kind of neat to see a sculpture of one of "my" plants.

This next one is my second-favorite. The picture of the real plant is an old one - these ones are only in the cactus house, which isn't open on Sundays. Go on a Saturday to see the cactus house!
This piece (the largest) is my favorite. It was labeled as Agave salmiana, which I couldn't find in the desert garden... I think it might be in the cactus house also. But I found several "lookalikes". Some of those real plants are even almost the right color!
﻿
I'm sure Khachatatouryan's work is very expensive, but could you imagine having one of those as a piece of garden art? Maybe surrounded by real Agaves...

I also found this Agave, look at the curls! The species names started with an "V", but I didn't get a picture because it was off the path, and I didn't want to get yelled at by the guard...

The exhibit runs until January 2nd, in case anyone is interested. I might have to go to the gardens again soon - all the cacti and succulents in the desert garden are getting ready to put on a show! There were bloom stalks everywhere. Some of the Aloes have already started:
﻿
I think it would be easy to post a picture a day if I got to go to the Huntington or another garden everyday in January! Too bad that definitely won't happen...
Posted by Renee at 7:24 PM 6 comments:

2 months between posts is a little long. My only excuse is work - too much of it to both take care of the garden and blog, so guess which took priority? And I have been working in the garden - replacing summer veggies with winter ones (which the bugs all ate), uncovering the sedums underneath the melon (which promptly caused them to get sun burned) and planting more bulbs. At least that worked!
Since its almost the end of the year (and almost a year since the back garden got re-done!) I figured some comparison pictures might be good:
'Chocolate Chip' actually looked better a few weeks ago, before the crazy cold weather hit, but it's still going. I'm hoping it might make some flowers next year. O. macrocentra pretty much exploded in size, and has regained its purple coloring with the cold nights. It bloomed a lot last year - I wonder if the same will happen this year?

My project for January, to get back into blogging regularly, will be to follow Allison at Bonnie Lassie's example, and post one picture per day. It might be a few bleak pictures, depending on how the weather goes! It's been abnormally cold here the last few nights (down in the 20's, even 17 deg F!), so most of my time lately has been spent wrapping up some of the succulents/cacti... But tell that to the little stone cactus, hiding under the leaves and Mexican Feathergrass:
A new beginning, again, for both the stone cactus and my blogging. Happy New Year!
Posted by Renee at 1:29 PM 6 comments: