Since getting back from Austin, I've been spending a lot of time in my own garden, trying to capture some of the inspiration and magic that came from that awesome weekend. However, the weekend after Austin, i ended up in Downtown LA, and came across a great garden i wanted to share...

While wandering in DTLA, i came across Spring Street Community Garden - they are hard to miss with the blooming nasturtium outside:
Antonio saw me taking pictures outside, and invited me in to talk about plants!
They had the expected veggie beds - all of them beautiful and already lush. 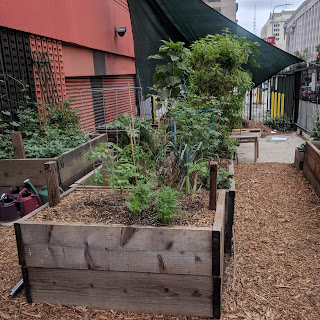 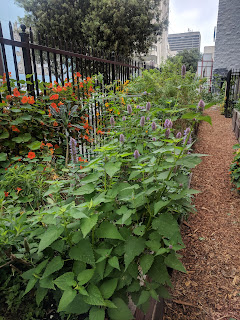 There were also a lot of ornamental vignettes - like this living wall installation.
They are growing papaya - successfully! They've also harvested a pineapple...

And here's the coincidence, and link to Austin - they were growing Piper auritum (Hoja santa / rootbeer plant) - a much admired plant in Margie McClurg garden in Austin.
Antonio was gracious enough to give me some cuttings - more evidence that gardeners are the best! 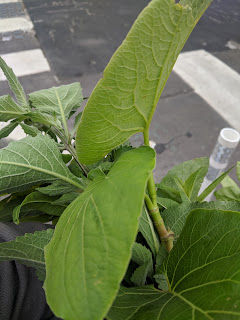 Now, i have been very unsuccessful at cuttings in the past, but fingers crossed these will take... It was so fun to see this garden, and talk to Antonio. If i lived near a community garden like this, i'd join in a heartbeat!

Wednesday Vignettes - From the 2018 Austin Fling

I went to my first garden blogger Fling this year, in Austin, TX. There were so many gardens to see and great people to meet! I had a lot of fun! Here are just a few of the pictures I took, all from Day 3's gardens...

I learned so much, and got so much inspiration for my own garden, I can't wait to get back out there. I'm also looking forward to seeing everyone else's posts on these gardens! And a huge thank you to the planning team and sponsors for making this fling a great experience!
Posted by Renee at 7:21 AM 16 comments: