This is the start of the third year for my front garden. Since the saying is "first year - sleep, 2nd year - creep, 3rd year - leap", I thought it would be interesting to take a weekly picture from about the same spot and see how the garden changes. Someday, I'll do a more detailed post about how it got to where it is, but for now, I want to see where it's going.

You can see some left over daffodils in the back (right), by the cherry tree (whose top is cut off in the picture). They don't last much past April around here, but they are supposed to be one of the few spring bulbs that will come back year after year. I guess we'll see next year!

The dominant feature right now is the purple ice plant, either Lampranthus spectabilis or Delosperma cooperi. Judging by the bloom time, L. spectabilis is more likely, but its not supposed to be hardy in Zone 11, says Sunset, which these ones definitely are. D. cooperi is hardy here, but is only supposed to be 3 inches tall (these are way taller than that) and blooms in summer (these don't).

The front garden also depends on ornamental grasses, besides the stupid lawn that will go away one day, but they've all been recently cut back, so they're not as noticeable right now.
Posted by Renee at 6:36 PM No comments:

Welcome to my blog: Gardening Turned up to Eleven. Before I get all distracted by interesting plants and all the weeds that need pulling, I figured I should write down my goals for this blog..

Goals for the blog:
1) Keep track of all the stuff that works, doesn't work, helps, grows, dies, and changes in my front and back gardens. With pictures and all! Since I was young, I've loved playing in the dirt, but I haven't been good at writing down what I've learned. So this will be a place to record all those things.

Also, I'm trying to get rid of a lot of "stuff" - which means I need to actually write down which plants are where, and what they need, instead of saving the pots/labels/tags, which inevitably get lost and clutter up the garage.

2) Show some pictures! I resisted getting a camera for years, mostly because I don't like pictures of me. I still don't like those, but since I have a camera now, I figure I better use it some. And what better way than to take pictures of plants? I just have a point-and-shoot right now, and I'm still learning how to use it, but I'm sure the pictures will get better over time. And since pictures are no good just sitting on my computer, I can put them out here to share (even if the only person interested in them is me...)

3) Show Mother Nature you can garden in the desert! And by Mother Nature, I mean the Internet... I've seen a lot of blogs, and been inspired by a lot of blogs, that cover different climates and different parts of the world. I haven't seen one for my area (Southwest part of the Mojave Desert) and I wanted to add to the information out there. My gardens aren't completely a desert landscape, but conserving water and using interesting and native plants is definitely part of the plan.

Right now, the plan for the blog is to post something regularly (3-4 times a week) and see how that goes... I have a whole lot of plants that I want to document (goal 1) as well as some projects. And I'm also hoping to include some pictures of interesting landscapes/ideas (goal 2), especially as I begin to think about the front garden overhaul, part 2.

So please join me as I try to coax something (anything!) to grow in my sort-of desert garden (turned up to eleven)
Posted by Renee at 8:24 AM 2 comments:

I have an (unhealthy?) desire to rescue plants. Usually from big box stores, but sometimes from abandoned houses, or neighbors who try to throw them away. The latest "rescue" is a Cordyline fruticosa, or Ti Plant. As usual, found on the 50% off rack for less than 5 bucks: 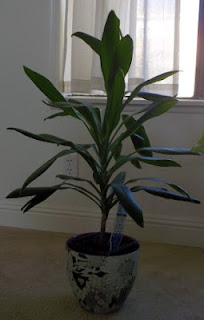 I need to remember to take pictures for the "before" and "during" also, and not just the "after". This one was drowning in its pot - root rot had already killed the other stem that was in there (although I'm trying to see if that one will grow back!). So I unpotted it, sprinkled it with some cinnamon, and repotted it in some well-draining potting soil (and a smaller container). This kind of cordyline isn't hardy here, so for now its inside. If it does well, I might put it outside for the summer. Strangely enough, the tag it came with shows a plant with purple leaves - this one is definitely green. Maybe with some more light (and less water!), it will turn purple?
Posted by Renee at 10:45 PM No comments:

In addition to the gardens outside, I also have a bunch of indoor plants, many left from when I lived in apartments. This one is a ZZ Plant (Zamioculcas zamiifolia) that I got from a neighbor many years ago. And by "got", I mean "intercepted as he tried to throw it away (!)". 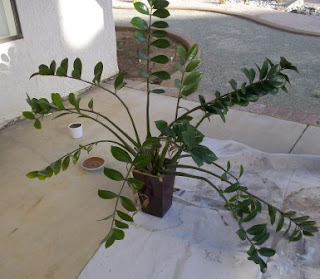 Apparently it was his ex-girlfriend's. It came with the pot (plus some plants - that I'm sure will show up later) and the same pot in a larger size, which I planted with two Dracaena marginata: 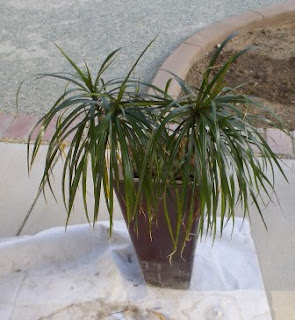 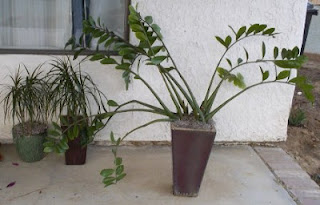 ﻿
None of these are hardy outdoors here, of course, although they should be able to be outside for the summer. Right now, ZZ is back indoors (the wind was too hard on his stalks - two even broke off!) but the others are still outdoors. I think the extra sun they get on the part-shade patio should help them.

Note to future - next time, don't wait for 5 years before repotting! Now to see whether they all survive this adventure....
Posted by Renee at 9:15 PM No comments:

New Plants in the Garden

Two days ago, the mailman (actually, Fedex) brought my birthday present. A big box of plants! Now that I've gotten around to planting them, here they are: 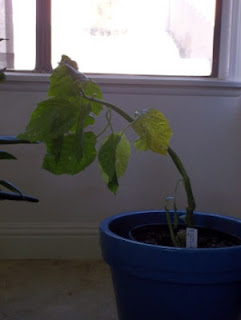 This one isn't going in the ground yet, although it might be able to survive once it's a bit bigger. Sunset says it's zone 12 and 13, and I've had luck overwintering other plants from those zones in specific spots. For now, it's in a big container inside - once the winds die down a bit, it will go outside again. He looks a little bit sad in this picture but a new support plus a day in the sun already has him looking more upright. There's actually two stems, and a third little one. 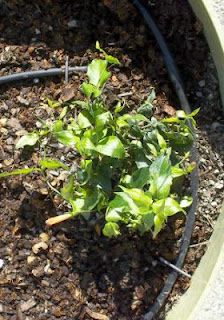 aka: Firecracker vine. This one isn't even in Sunset! It's a vine, up to 100 inches long. I'm not sure where it should go yet. I think it would look nice growing on the wall, if it can grab onto it, or with a trellis. For now, its in one of the pipes. I removed some plants that weren't growing, and added more well-draining potting mix for this one, and the Lantana. Once I see how this one grows (and what tries to eat it...) it will go somewhere else! 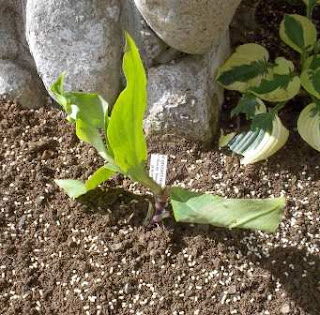 aka:Amethyst Toad Lily. This one is a part-shade, moisture lover, that I just had to ask for because of the flowers... (see mature picture link!) There is only one spot in my garden that meets its requirements - in the front garden, near the front door. There is spot that is all-day shade except in the morning, due to the stone column, and just the regular watering that bed gets plus the shade makes keep it cool and moist. There's two hostas keeping it company. I wonder if I'll see blooms this year? The little pellets on the soil are Sluggo - there is an issue with slugs (as seen in the hosta leaves) and I was worred they would go after the Toad Lily. So far (one day later), it looks all good! 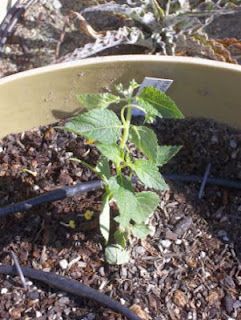 Lantana is one of those plants that gets treated as an annual here - but I don't understand why? It works in zones 10, 12 and 13, so with a bit of protection it should survive... For now, this one is in the pipe with the Manettia cordifolia, but if it gets big and looks like it will survive, its going in the bed with the purple-leaved tree (Cercis canadensis 'Forest Pansy'), along with two other Lantanas that are already there...

I can't wait to see how these all grow! They all came from Plant Delights (same place as the mature pictures links). Thanks Mom, Dad, Alan and Nigel!
Posted by Renee at 8:25 PM No comments: