Telling you about my houseplants...

A few weeks ago, Loree at Danger Garden asked people to tell about their houseplants, and showed hers! It took me a while, but here are all of mine. I have, as it turns out, a lot? I've always had a lot of houseplants... for a long time, i didn't have a garden, and indoor plants is how i gardened. Now, i have the garden, and a lot of indoor plants. So it's the best of both. If "best" means more plants, which of course it does.

Let's start near the patio door, and go clockwise around the house. I'll warn you - I'm not all that good at taking pictures indoors... But i think i got most of the plants!
I should also note that i'm not very good at watering - everything that survives inside has to learn to do with watering every 2 weeks or so.

The kitchen is to the right of the area we were just in. There's actually an orchid in between that i missed taking a picture of... The kitchen may be getting remodeled soon, and plant needs will be considered!


That Jade plant is going to have to move... or i need more counter space. (notes for kitchen remodel...)

Now we're in the dining room. Some people have centerpieces. I have plants:


Now we're in the living room. Before we go around, here's the view back to the stairs:
The aloes stay there year round. The hoyas (circled in green) go outside in the summer, or as soon as the temperatures at night stay above 50 deg F.

Continuing around the living room - there's a weird open spot near the front window. That's where the Christmas tree was. We're still trying to decide whether the furniture moves back, or if there's more room for plants.
That large pot is a pathos vine. It's probably dead, but it keeps putting out one leaf... and i have a problem with giving up!

Next are these (and yes, those are my fling pots!)

Not quite done yet! Looking back at the living room, there are two more groups of plants:


Now we're on to the office. This room was sadly lacking in plants up to a few weeks ago. Then this baby showed up:
It came from Lowes, with the pot! Which ever one it is, it was a steal, considering.

Outside of the office is the TV room. It has more plants:
There is another s. cylindrica i didn't get a picture of, mostly because it's very sad. It's below these two:
almost around:

This next plant has a story - it was given to me by a neighbor years ago, when he and his girlfriend broke up, they were moving, and she didn't want it anymore. I don't know how old it is, but i've probably had it for 10 years? It's the source plant for all the other zz plants i have:
Now there is one more area to look at! I thought i had already posted about this on the blog, but i guess not. A few years ago, we remodeled the master bathroom. One goal was to increase the amount of light in the room. The combination of lots of light and more humidity than the rest of the house means that (of course?) the bathroom is filled with plants! This is the far side of our walk in shower:
Some of the plants in that picture: a nepenthes (bottom right), another monstera, a fiddle leaf fig, a yucca (weird, but it's one of the few plants that does well close to that window), a superlong senecio radicans, and a bunch of other stuff. Outside the shower, there are two other plants:

That plant has been a trial and error - it's further away from the window than most plants want to live (the yucca was very unhappy) but the combination of a shade-happy plant and a bit of extra height seems to be doing the trick.

Phew - we made it all the way around! There are few odd and ends that i didn't get a picture of, but i think i captured most of my indoor plants. I would love to promise that i won't get more, but that would be a lie. I like my indoor plants just as much as the garden, so i'm sure they'll keep multiplying... just like they do outside! Do you keep houseplants?
Posted by Renee at 10:00 AM 6 comments:

Design books sometimes talk about picking a color palette for your garden, to make it look better, more organized, etc. I'm definitely not good at any of that, but in the early spring, there is definitely a lot of yellow in my garden. Let's pretend that's on purpose?

Here are two yellows that always start the show in February:

I have several acacias, but a. baileyana always starts blooming first

Now waiting with baited breath to see what the Palo Verde does this year... After what happened to it, maybe expecting blooms is too much?
Posted by Renee at 10:00 AM 5 comments:

In the back garden, there is one corner bed that always takes forever to cut back in the Spring late winter, because there are so many plants. There are two Russian Sages (Perovskia atriplicifolia), at least 2, maybe 3 Salvia greggii, and a relatively new addition, rock rose (cistus sp). There are also several agaves and other spiky plants spread through the bed. In the summer, it looks great, lush and green. In the winter, it looks like:
So far his year, i've managed to get through half the bed before i ran out of room for the clippings. But it already looks like progress!

I really have to move that furcraea foetida - it will be too giant soon. Perhaps i should try it in the giant pot?

However, the bed continues...
And pruning uncovers other problems, like giant mounds of dirt. Probably gophers, or ants, or who knows what.

A view from the other side shows what's still left...
That plant that's falling over is a winter casualty. It was upright before the snow, but hasn't really recovered. I'm not sure whether to stake it or do something else? It's a young eucalyptus, although i'm not exactly sure which one. That acacia baileyana var.  purpurea just visible on the left could probably also use some pruning. It doesn't appear to have any winter damage. I think i'm going to let it bloom first...

Meanwhile, i have to figure out what to do about this (other than have fewer plants, because no):
At least i have time to think - since the yard waste pickup is full! I've asked the city for more space, but they are out of bins (so they say). Progress will continue...

This weekend, it was "too cold" and "too windy" to do much work in the garden. Those terms are in quotes because i'm sure some parts of the world would disagree that our weather is anything to complain about... But the wind was blowing, which makes getting rid of the leaves extra hard.

But I did get a chance to take few pretty pictures of plants. So instead of showing additional progress cleaning up, here are a few close ups!


Are these close ups because the rest of the garden is a mess? Maybe yes? Here's to a less windy weekend soon!

Last year, I finally got a chance to visit the Salesforce Park in San Francisco. It's a large public park located on top of the new Transit Center. The park is only about 2 years old, but it already has an interesting history: it closed 6 weeks after it's initial opening due to major structural problems.

I think you can see that about a year went by after the plants were planted without much human attention. The park has a varied collection of plants, organized in themes, mostly by location. Not many of the plants are labeled, but i found this great walking tour on San Francisco Trees that identifies most of the plants.

My pictures aren't nearly as organized, or labeled, but it definitely is a gorgeous park! We started in the South African garden:

Also, how much would you like to live in one of those apartments?
Signs in each part of the garden let you know a little bit about what you're looking at:
More plants!

Other signs tell you about the uniqueness of San Francisco. Although i can't imagine much fog actually makes it to the middle of this urban area. 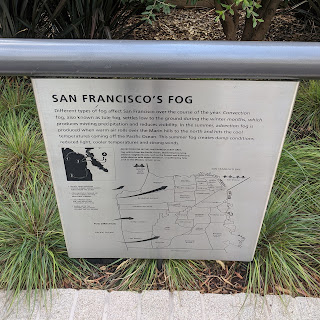 The wildlife has found the garden, of course. I doubt the hummingbirds cared much about structural cracks:
Found the agaves!
and succulents:


In the middle of park is a big green area - a dought tolerant lawn of sorts:

On the opposite side of the desert beds, are these giant leafy beds:


There were so many beautiful plants and combinations! Just a last few pictures:

The park was definitely worth a visit! Here's to hoping it lives up to it's potential in the coming years.