I challenged myself to take a picture a day for January, and post it. I will have to come back and think about what I learned, but until then, here are the last day's pictures of my jade plant, Crassula ovata, including one with some super-heavy editing...

I almost killed this plant a few years ago, by over watering it. Now it happily lives in my kitchen window.
I can't believe its February already!
Posted by Renee at 10:47 PM 4 comments:

After a long day, I just played around with some pictures of the Sedum morganianum that's been living in my kitchen.

Its friends outside got turned to mush, I think, in the recent cold. But these ones are happy to stay in my kitchen for now! Hopefully it will grow the long trailing stems its known for, and I can get a cooler container for it.
Posted by Renee at 10:00 PM 3 comments:

For today's image, I started with the very precise variegation in this dracaena, which lives in one of the darker areas in the living room:

﻿ ﻿ And then, playing with some "fancy" photo filters and stuff, I got this:﻿ ﻿Today was another one of those days where I really didn't see the sun. But I did get some plant catalogues in the mail, so let the daydreaming begin...I think my garden style is going to be "one of everything" for a while!
Posted by Renee at 9:16 PM No comments:

another house plant, and clouds

In this case, Ficus elastica, or Rubber Plant, decided that making some new leaves for the new year was a good idea:
I'm not sure what prompted the growth spurt, but I'm glad it happened. This plant lives near an east facing window next to the front door, and it makes a nice green accent when I first walk in.
After yesterday's lesson learned, I wanted to include of these pictures of the sky today, and late last night. We've been having cold and rainy weather, and the sky has been looking pretty cool. These are all slightly blurry cell phone pictures.

You could actually see rainbows in some of the high altitude clouds, but they didn't show up in my pictures.

Here is what the sky looked like last night, at about 7pm. It was cold outside, but not raining yet.
I'm glad I was able to capture those images, even if my photography skills need some work!
Posted by Renee at 9:18 PM No comments:

Today's pictures were taken at the Rose Bowl... I was there for a running race, and I was hoping to take some nice pictures for the challenge. However, there was this to deal with:
Outside was decidedly unpleasant:

Here is the obligatory picture of the rose bowl sign:﻿
There weren't very many roses to be found in late January, but a couple brave ones still had some blooms, heavily weighed down with water from the rain.
I do always like the palm trees. Here is one clump, just right of the entrance:
But these really tall ones are really cool. Look how curvy they are! This is looking straight up:
There are also eucalyptus trees, with interesting bark patterns, adding some evergreen color:
Meanwhile, the rain was filling up the drainage ditches, but the race was about to start!
The finish line for the race was at the 50 yard line, inside the stadium. It drizzled the entire race, and got worse after I finished:
﻿  And for the football fans, a panoramic of the inside, standing in the end zone on the far end. I've seen a couple of games in this stadium, they're always fun (usually less wet though):

And now for a funny story/lesson learned: I initially thought the race was on Saturday, and I got up early to drive down. There was this amazing-looking fog all along the mountains and desert, but when I realized that I could sleep more, I didn't take a picture of it, figuring I'd get one on Sunday. I woke up Sunday morning and - no fog. So the lesson: always take a picture of the cool stuff when you see it....
Posted by Renee at 4:59 PM 2 comments:

After the pictures from a few days ago about the bad things winter did to my garden, I wanted to show some of the good things the cold weather has done too.

﻿  The O. macrocentra has also turned even more purple:
This Agave schidigera (first seen here) has also been happy, even if it's been cold. The iceplant next to it wants to climb over it.
About all the leaves in the pictures - I usually leave all the leaves from my neighbors tree in the front garden flower beds until sometime in spring. I figure they help protect against the cold a bit, and if they break down, add organic material to the soil. Plus I'm lazy about cleaning them up :)

I also noticed the Camilla is still blooming, and it looks like someone has been enjoying the pollen:
I was very happy to see my garden in the daylight again!


Too bad the flowers make such a mess. The leaves are pretty though!
Posted by Renee at 10:25 PM No comments:

I know succulents don't really need (or even like) terrariums...


and goodness know I don't need any more house plants....

but isn't this little succulent super cute in it's giant lantern/terrarium?
﻿It's adding a ton of color to my fairly neutral living room (which is not in the pictures above...) And the lantern makes a pretty crappy terranium, so I'm not worried about the air being too humid or anything.
Posted by Renee at 9:18 PM 4 comments:

But certainly making an impact, this sculpture seems both organic and not at the same time:

It kind of reminds me of a really cool tree house that I wished I had as a kid.
Posted by Renee at 5:41 PM No comments:

Some better pictures today! As I was out for a run, I was struck by the way some of the bare trees looked against the sky.

﻿
This one in particular had a very interesting shape, plus some green:
﻿ ﻿ On the way out, there was enough light to see some cool reflections on the river:
On the way back, the sky started to change colors, but that only made the trees more dramatic-looking:
﻿ ﻿I'll have to go back and take pictures again when the trees are leafed out - it must look very different!
Posted by Renee at 7:51 PM 2 comments:

I have to admit that I was too beat today to go find an interesting thing to take a picture of. However, staring at this piece of wall art reminded me of two things. 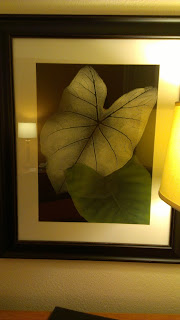 1. My visit to the botanical garden yesterday
2. I really want to create or find some garden art for my own house.

I'll do a better job finding a good photo opp tomorrow. This has probably been the hardest day for this challenge!
Posted by Renee at 7:55 PM 4 comments:

On travel again this week, but a combination of an early (and on time!) flight, and a nice day meant I actually got to see something outside. I took some pictures with my phone for today's picture, and I'll probably see if any of the rest, taken with my regular camera, are any good later in the week.

Like the rest of California, we've had some crazy cold weather - night time lows in the single digits and teens, and barely getting above freezing during the day. Given that we're technically zone 9A now, that's very unusual. Today was my first chance to take a look at what this Arctic front had done to my garden. It was pretty sad - that's what I get for not putting on all the frost blankets I should have...
﻿  The sedum x rubrotinctum in the upper left is usually OK with just the leaves from my neighbor's tree covering it, so it should recover in the spring... the plants in the both center pictures will go back under a blanket, and hopefully the centers and pups will stay alive in the spring. The Crassula coccinea 'Campfire' might be done for though. And a lot of the branches on the Feathery Cassia look grey - I'm hoping the plant will be OK, although the blossoms might not be.

My saddest loss was due to my own stupidity:
My Pachycereus schottii f. monstrosus is black. :( They're hardy to 20 deg F (about), and I didn't get home in time to cover it or move it indoors. Sigh.

Some things actually look almost pretty with the winter damage:
But not all is lost! Most of the plants are fine, even some that I wasn't sure about. Most of the (soon-to-be) larger agave are fine, and the Callistemon 'Little John' is under a frost blanket, and looks OK.

﻿
And apparently winter completely missed my crazy Pleiospilos nelii, which is getting ready to flower:
It's been getting warmer this week - but I'm leaving the blankets on for the next few days. I hope spring gets here soon!
Posted by Renee at 8:11 PM 2 comments:

We have some interesting roadside plantings around town, like these:


but why do they groom the plants like this:
That's a Dasylirion wheeleri, but it looks like an ugly pineapple. I guess they kind of match the palm trees, but still! They're planted in a big gravel bed, so they shouldn't get in anyone's way. But the entire area is groomed like this. Maybe I'll plant one in my garden and leave it untrimmed, just to correct the balance a bit.
Posted by Renee at 9:10 PM 2 comments: