A few weeks ago, i posted some pictures of my agaves. For this wednesday vignette post, here are some more...

Good thing there is no such thing as too many agaves!
Posted by Renee at 9:00 AM 8 comments:

As everyone keeps reminding me, it's not spring yet. Out here, we can get frost until about mid March. So, to keep myself from rushing ahead, i figured i would write down the key projects i want to do this year, so i can think about Spring, but not kill any plants with my over enthusiasm yet!

I'm doing this as a "tell the truth" tuesday post, because you can see some of the before pictures... and they are not pretty! Hopefully, there will be better pictures later this spring! Thanks Allison for keeping me honest about all these parts of my garden!

In the back garden, i want to:

In the front garden, i want to:


Of course, a general goal i should have is to stay ahead of the million weeds that are about to spring up in the DG around the garden. After all the rain, i predict it will be epic this year. But i know myself well enough to know that i won't be staying ahead of the weeds too well... plus they are easier to pull all at once right?!

Now i'm off to look at plants to buy for these projects, and counting down the days to it being dry and warm enough to start cleaning up.
Posted by Renee at 4:35 PM 8 comments:

In late December, with family visiting, we drove all around the Mojave  desert area. In three days, we saw three completely different views of "the desert" in december. For fun (and because i can only share so many pictures of piles of trimmings...) I'm sharing some pictures from all three days.

The first visit was out near Victorville. If you wonder why we visited Victorville, it's because we went to go look at a parking lot:

there are also some airplanes:
As the pictures show, it was a blue sky, light overcast kind of day. It was about 70 degrees F.
Once we were done looking at parking lots, we visited a bottle tree farm. One of those random, only the Western US, middle of nowhere-ish kind of places.


Perhaps this video gives a little better idea of how cool and eerie this place is: 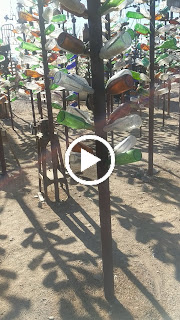 Email ThisBlogThis!Share to TwitterShare to FacebookShare to Pinterest
Labels: Hike

Something Different - Wednesday Vignettes From Above

I spend a lot of time on airplanes (for work). Usually, these trips happen at night, and i'm either sleeping, or watching some horrible movie. Or falling asleep while watching some horrible movie. During the day, with that annoying in flight wifi, i'm usually working. But earlier this year, i had a flight during the day, with no work, and a window seat. Here are some views of Nature at 35,000 ft.

We were flying from the East Coast to LAX, and this is looking south.

These pictures are in flight order (so heading more west as we go through the post).


Sometimes it worth looking out the window! And while i understand there are lot of downsides to modern air travel, i'd much rather fly over all that than go by covered wagon... Which is a good thing to keep in mind when my next flight is delayed by another 3 hours.

Every once in a while, I visit Northern California with family, and that usually involves a visit to the winery! These pictures from the last visit to Clos LaChance seemed like the perfect thing to cheer up this wintery weekend:


These are some of the pictures i think of when i think of winter in California !
Posted by Renee at 9:00 AM 5 comments:

The Garden After the First Rain (Wednesday Vignettes)

I found these pictures on my phone today, and even though they are now a bit old (from Nov 2018), I really wanted to share them here. This was the first (significant) rain we'd had since 2017, and the combination of clouds and time of day made the light look very strange...

So far (Feb) this winter has been wetter than the last few, which has been great. The light has never been quite like this again though!
Posted by Renee at 9:00 AM 10 comments:

Allison at Bonney Lassie has been encouraging everyone to share the not-so-great parts of our gardens. While i haven't been doing a lot of gardening, a break in the rain this weekend left some time to address the truth that one of my agaves didn't look so good:


Much to the delight of all my neighbors, that's in the front garden. This poor agave (unidentified when it was planted) had been declining for a while. The first part of cleaning it up just exposed more of a mess:
Since rot doesn't usually cause dirt to migrate into the center of the agave, it looks like the gophers are back. Sigh.

Thankfully, a replacement candidate was waiting in the back garden pipes:
This is agave franzosinii 'Lost Wax', from the Ruth Bancroft garden. It was high time for it to get out of the pipe, before it takes over like Mr. Ripple has. A few moves with a shovel and some new gravel mulch, and it's in the front garden:
The blue works well with the blue ball decoration and everything else. It's on a slope, so the rain shouldn't bother it too much. I will be upset if the gophers eat this one, although there's another pup safely protected from them.

Some other things i got done this weekend while the rains held off:


Any of those situations could have made for good "tell the truth tuesday" pictures, but sometimes cleaning up is the best part. Is it spring yet?
Posted by Renee at 9:00 AM 12 comments: