When I first started redoing the front garden three years ago, I ended up with a lot of grasses - mainly blue fescue (Festuca glauca 'Elijah Blue'), pink muhly (Muhlenbergia capillaris) and Mexican Feather grass (Stipa tenuissiam). They all provide a very "soft" look, and what goes better with soft than spiky?

There's another new sorta-spikey addition to the front garden bed: an Agave Schidigera!

This is a smaller Agave, that only grows to be about a foot wide and tall, and instead of teeth, it has these cool "threads" instead - kind of like the false red yucca (Hesperaloe parviflora) It does have spines though. It's currently sitting next to a blue fescue, and they're about the same size - I think the contrast between them in kind of cool: 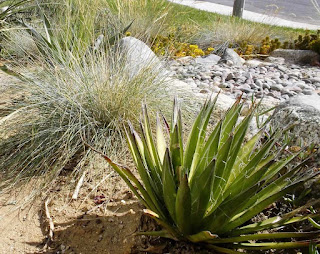 And this one come with a cool surprise - 7 pups/offsets! Since it is right next to the path, I didn't want an entire colony of A. Schidigera, so I pulled off the pups and potted them up into their own containers:
Now I've got plans for an all-agave (but different types!) front row for one of the beds in the back garden! Or they'll go on the slope... Maybe in a container or two?
Posted by Renee at 8:22 PM