My day may have started rather unproductively (sleeping in until noon!) but i ended up getting a lot done!

Here's the list from last time:
Still left to do:

I didn't take many pictures today, but here is what the acacia looked like before: 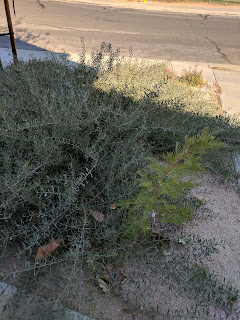 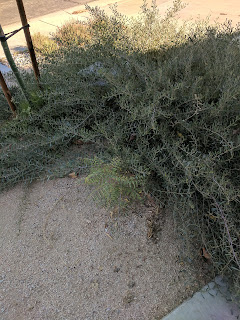 It's now about half that size. I'm not sure this one will stay long term, although i love the easy green it provides, with cute yellow flowers...

I also seem to have a new friend/permanent resident: 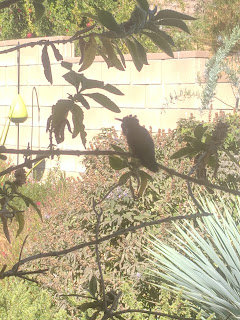 That's a bad picture, but there's a new, small, purple-headed hummingbird (looks like a male Costa?) that's decided my garden is it's home. Hummingbirds show up all the time, of course, but generally they don't really care much for humans getting near.  This one is happy to sit above my head on the patio, or in the branches of various bushes and let me get really close. He will also buzz me if i'm getting in his way. He's territorial in a strange way too - happy to share the feeder and some of the plants, but aerial battles ensue if another hummingbird tries to sit on his perch or drink from one particular aloe bloom. I'm hoping he'll stick around for the winter!

Next time, i'll try for better pictures! Hopefully renovating the beds will make for more exciting pictures than hacking my way through the bush!
Posted by Renee at 5:25 PM