It's still raining! So far, the rain here has been the good kind - not too much or too fast, and the garden is just soaking it in. We're supposed to get another storm this Sunday, hopefully it will keep going this way.

I didn't get to spend a lot of time in the garden this week, but some progress and decisions have been made... All the piles of trimming are now gone, Fingers crossed the gophers are too - it's been a week without anything showing up in the traps. I decided to remove the opuntia rufida in the left bed - which means there's now an even bigger empty spot: 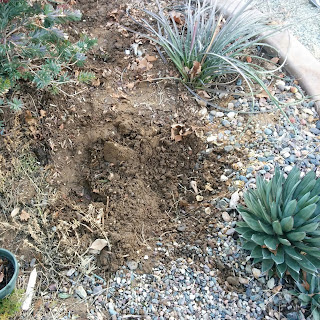 I have some plans for replacement plants - once the ground is drying i'll plant some sections of the cholla that was removed, and a pad off a small optunia that has orange flowers that a friend shared. Next up for this bed is digging out and replanting these old grasses so the agaves have more room. 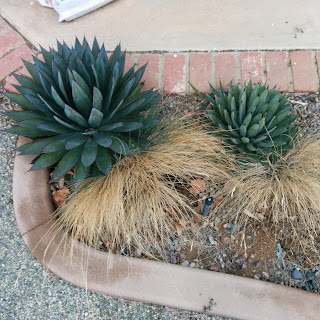 That's A. 'Blue Glow' and A. 'Royal Spine', also known as 'little shark', according to google. I've also figured out how to adjust the sprinkler layout in this bed, which i'll implement as soon as the rain stops long enough to test it. I have to remind myself not to start thinking about buying plants yet...

The other Royal Spine celebrate it's freedom from the opuntia by looking pretty in the rain this morning: 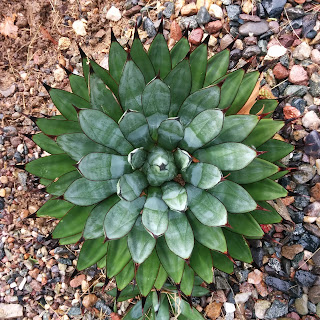 Since I'm not getting much work on this rainy sunday, here are two more agaves that caught my eye in the rain; 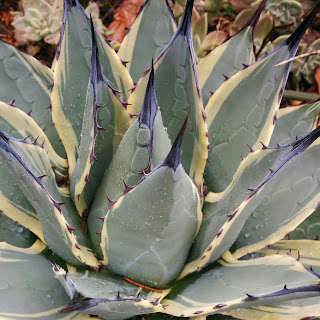 That's agave 'cream spike' (or a. applanata 'Cream Spike', or a. parryi 'cream spike', which is how it was labeled when i bought it). Whatever it's called, it's pretty, and i want to it hurry up and make more offsets.

I think this next one is a. shawii. The rain makes its teeth look even redder than normal: 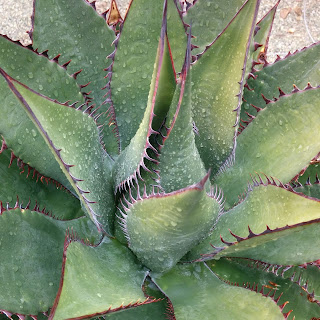 Next up for the garden is more trimming (the sage bushes, and soon the grasses) and weeding. I'm also trying to figure out what to do with the hill side and how best to clean it up. But for now, i'm going to enjoy the rain some more!
Posted by Renee at 11:11 AM

Email ThisBlogThis!Share to TwitterShare to FacebookShare to Pinterest
Labels: back garden, Project Update