At least for now, going through and finding all the things that need fixing in the garden was helpful! This weekend I managed to get started on some things to fix, although not as many as I hoped because 1) i ran out of room in my green waste bin, and 2) it was raining! I've asked for a larger green waste bin, but the rain i'm just going to gratefully watch. I was able to get some pictures of the pretty things in the garden this weekend, while everything is clean from the rain!

There are flowers! In the back is an Agave 'Crazy Horse' pup. 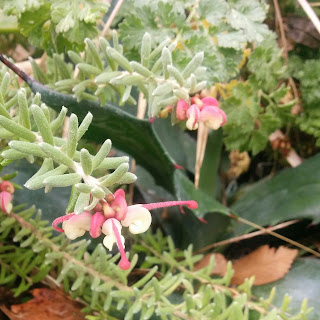 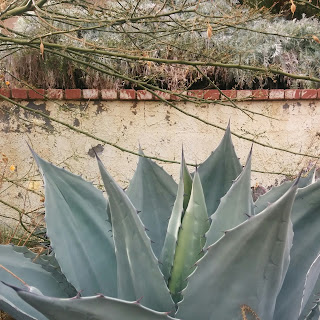 This agave lophantha splendida was mostly dead about 4 years ago. Now, its a super bright green spot each winter when the russian sage is dormant. 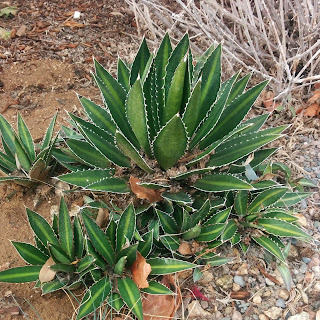 this vignette is one of my favorite views of the garden year round. I think this yucca rostrata is almost big enough to have a trunk! 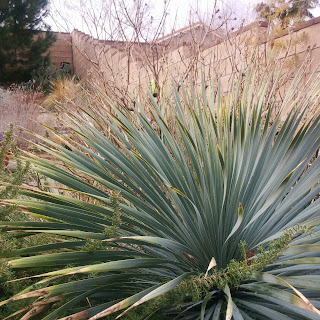 While cleaning out the horrible bed i showed last post, i noticed one of the aloe's is blooming! This is exciting, because for years, i've had no success... not sure why now is different, but i'll take it! 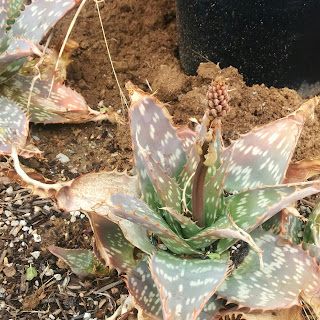 I spent quite a bit of time cleaning out the horrible bed with the leaning cholla, etc. Sadly, when i tried to re-right the cholla, it was clear that the root ball was broken. So i dug up the whole plant, and separated some segments that I'll replant once they've callused over and the rain is gone. Meanwhile, i'm trying to figure out what to do with this: 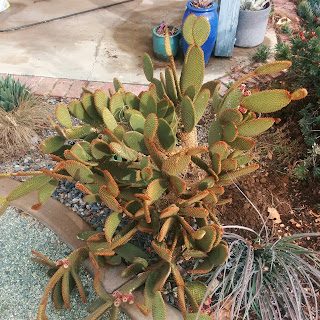 This opuntia rufida (not microdasys, according to google) is one of two - there's a better looking one on the other side of patio. It lost half it's arms late last year, and the remaining part is learning over a very pretty agave. O. rufida is also a pain to maintain, because of the glochids. Also, while i was always worried about their hardiness, they grow super fast, so they need a lot of pruning.

Given all of those things, I'm debating whether to keep it where it is and try to prune it into a better shape? Pull it out and restart from a segment? or pull it out all together an replace with something else, likely another opuntia, so it will complement the other side? If I pull it out of the ground, i'll also have a chance to dig out the bermuda grass that's been growing there. I guess i'll have until next weekend to decide!
Posted by Renee at 6:17 PM

Email ThisBlogThis!Share to TwitterShare to FacebookShare to Pinterest
Labels: back garden, Project Update